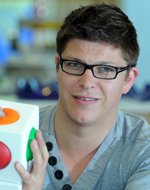 Born into a family of pro wrestlers, trapeze artists and headline acts at the Moulin rouge, Dr Ben Schogler is not your average academic. This eclectic DNA is reflected in his career to date: a musician who decided to study psychology, and who, after a few appearances on the international lecture scene (and a brief stint as a lecturer in the Caribbean), found himself at the cutting edge of research to create a new musical instrument for disabled children.

For many people, the barrier to making music is the instrument itself: you can’t make music if you don’t know how to use the instrument. These barriers can be even more difficult for those with physical and learning difficulties. An idea began to take shape, that of an intuitive musical instrument, one that everyone can play, which both sounds great, and affords expressive potential.

With funding from NESTA – and support from world luminaries such as Nigel Osborne – he teamed up with partner in crime | co-inventor | co-founder | all round co-person Dr David Skulina. Together they invented the Skoog, a radically simple, all-new musical instrument that gets more people playing music, particularly disabled children.

Why not check out our frequently asked questions.